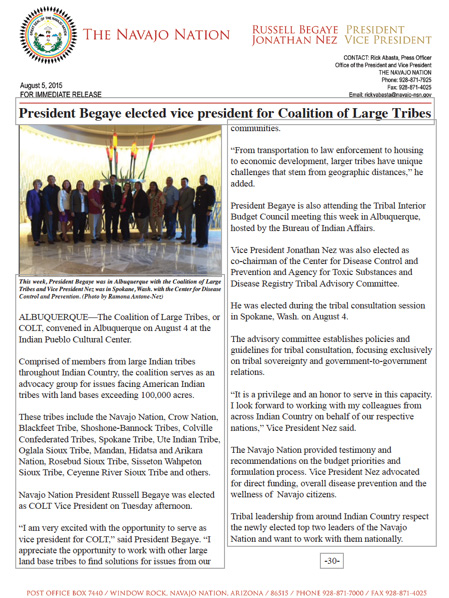 ALBUQUERQUE—The Coalition of Large Tribes, or COLT, convened in Albuquerque on August 4 at the Indian Pueblo Cultural Center.

I am very excited with the opportunity to serve as vice president for COLT,” said President Begaye. “I appreciate the opportunity to work with other large land base tribes to find solutions for issues from our communities.”
“From transportation to law enforcement to housing to economic development, larger tribes have unique challenges that stem from geographic distances,” he added. President Begaye is also attending the Tribal Interior Budget Council meeting this week in Albuquerque, hosted by the Bureau of Indian Affairs.

Vice President Jonathan Nez was also elected as
co-chairman of the Center for Disease Control and Prevention and Agency for Toxic Substances and Disease Registry Tribal Advisory Committee.

He was elected during the tribal consultation session in Spokane, Wash. on August 4.
The advisory committee establishes policies and guidelines for tribal consultation, focusing exclusively on tribal sovereignty and government-to-government relations.

“It is a privilege and an honor to serve in this capacity. I look forward to working with my colleagues from across Indian Country on behalf of our respective nations,” Vice President Nez said.
The Navajo Nation provided testimony and recommendations on the budget priorities and formulation process. Vice President Nez advocated for direct funding, overall disease prevention and the wellness of Navajo citizens.

Tribal leadership from around Indian Country respect the newly elected top two leaders of the Navajo Nation and want to work with them nationally.