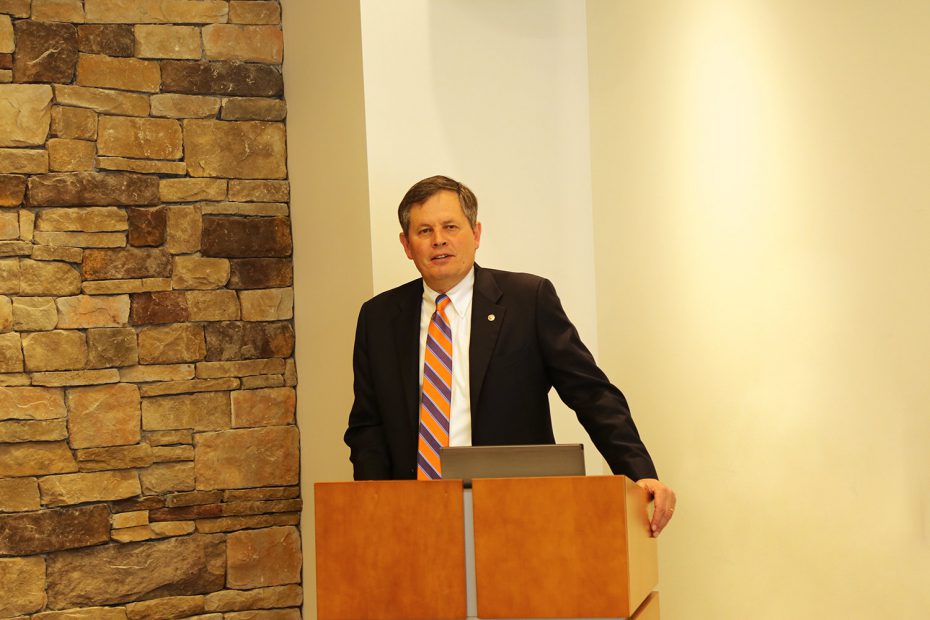 WASHINGTON— The Coalition of Large Tribes (COLT) convened for a strategy meeting to hear updates on issues from Sen. Steve Daines (R-Mont.), a member of the U.S. Senate Committee on Indian Affairs, and the House Natural Resources Committee staff.

The meeting was held on Monday, May 1, at the National Indian Gaming Association’s Stanley Crooks Center on Capitol Hill.

President Russell Begaye serves as the Chairman of COLT and Cheyenne River Sioux Chairman Harold Frazier is the current COLT Vice Chairman. COLT represents more than 60 percent of all tribal lands in the United States. The coalition is a partnership of federally recognized tribes whose land base is larger than 100,000 acres.

Staff Assistant for Sen. Daines (R-Mont.), Sophie Miller said that based on a Government Accountability Office report, there will be an oversight hearing on May 17, addressing high-risk issues relating to the U.S. Department of Health and Human Services (HHS) and the Bureau of Indian Education (BIE). Miller said they hope President Trump will address these issues during this hearing.

Although the federal government is experiencing financial constraint while still being mindful of expenditures and federal agency budgets, tribal nations should understand that just as the president presents his budget, so will Congress.

“This has always been par for the course,” she said. “Congress will appropriate differently.”
Miller said she expects to see an Indian Health Care Improvement Act introduced along with a Self-Governance bill that aims to allow tribes to self-govern all Bureau of Indian Affairs (BIA) programs.

“We need to make this bill longstanding and I think we can work together on this as a strong bipartisan bill,” Andrews said. “If there are any issues with this bill, we need to rectify it now.”

Joe Valandra, Managing Director for VAdvisors, LLC, said that President Trump recognizes the deficiencies that exist within the Indian Health Care system. He expects legislation to be introduced that addresses accountability in HHS extending to Indian Health Care.

Valandra also said that currently there is “an openness to a Cabinet-level position for Indian Affairs.”

“Whoever is communicating with the president on these issues has made a case for the severity of issues facing tribes and the need for this position,” he said.

President Russell Begaye has consistently urged both the Obama and Trump Administrations to create a cabinet level position and have it filled by a Native American.

“I have called upon President Trump to create a cabinet–level advisory position within his administration,” President Begaye said. “All too often decisions are made on behalf of tribes without a comprehensive understanding of how tribes will be affected. As Native Americans, our concerns should be articulated at the highest level.”

Both Thompson and Tuell addressed the Indian Trader Act, which they described as a ‘very broad’ statute from the 1800s that hasn’t yet been implemented. Tuell said currently there is movement to revitalize this statute and federalize the oversight of commerce on Indian nations.

“We need to address dual taxation on tribal lands. A comprehensive regulatory scheme needs to be put in place via the Indian Trader Act,” Tuell said. “The goal is to get states out of the way of taxation on tribal nations. The federal government needs to delegate this oversight to tribes.”

Executive Director of the Navajo Nation Washington Office, Jackson Brossy supported this idea that tribes need to control commerce without the oversight of states.

“States shouldn’t be able to reach into our financial and budgetary pockets,” Brossy said. “If we’re able to get rid of dual taxation, we could save and create more job opportunities on the Navajo Nation.”

Tuell said the federal government should take action against subjecting Indian nations to state law. “There should be no state law supremacy over tribes,” she said.

Executive Director of the National Indian Education Association, Ahniwake Rose said tribes should plan for a 15 percent cut in school budgets for 2018. Although Rose said she hopes this won’t be the situation, she still encourages tribes to prepare for it.

“Voucher schools don’t have to work with tribal educational systems. The tribal perspective is for schools to work with tribal systems. This is our option. For tribes to be able to run their own schools is our own choice. What we need to consider is how we can expand this choice to include options like distance learning and homeschooling,” she said.

Sen. Daines (R-Mont.) said that tribes play a significant role in providing energy to the world. Daines said currently the world is looking to the U.S. for energy production and supply.

“A significant portion of the world’s energy is provided by coal, oil and natural gas,” Sen. Daines said. “The number one potential for producing energy comes from the U.S.”

In this, the senator said the U.S. has a tremendous opportunity to become energy independent and energy dominant.

“This is important for tribes who want to develop their resources for the world market. We need to encourage implementing more natural resource incentives.” Sen. Daines said.

Outside of representing seven federally recognized tribes within his own state of Montana, Sen. Daines (R-Mont.) said his staff works hard to represent concerns of all tribal nations in the U.S.

“Tribes need to be given greater authority as they have a government-to-government relationship established per their treaties,” he said. “Tribes need a louder voice in Washington D.C. and I can help you do this.”

The COLT Strategy meeting ended with a reception sponsored by CKP Insurance.